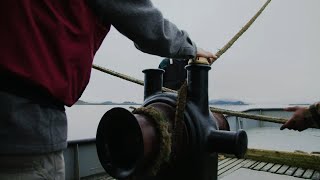 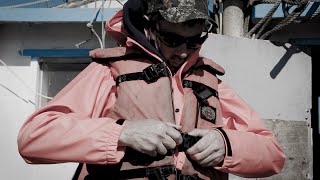 How should you respond if one of your crew falls overboard? That depends on whether you can see the victim or not.

Man Overboard is in Sight

It’s extremely important to keep the person in the water in sight. Point directly at the victim with an outstretched hand. Don’t take your eyes off them and don’t stop pointing. If you must attend to other duties, such as alerting the helmsman, get another crew member to act as the spotter. Just don’t stop pointing until they have a visual fix on the person overboard and are pointing directly at them.

Man Overboard is Not in Sight

If the person overboard is no longer in sight, either because the fall overboard was not witnessed or visual contact was lost, the helmsman should activate the MOB function on the chart plotter and make a note of the current heading. Maintaining the same speed, the helmsman should then execute a Williamson Turn. Turn the helm hard over toward side from which the person fell until vessel is heading 60 degrees from original course. Then turn the helm hard over in the opposite direction until on a heading 180 degrees opposite the original course. This will place the person overboard on the side of the vessel from which they fell.

Continue along this reciprocal course while searching for the victim. Make a mayday radio call notifying the Coast Guard and vessels in the vicinity of the person overboard so that they can assist in the search.

In rough conditions, approach the person overboard from the leeward direction. This will prevent the vessel from drifting down on the victim. Ready a crew member as a rescue swimmer by having them don an immersion suit.

If the victim is conscious and able to assist themselves, cast a line attached to a recovery sling to the person overboard. If the sling has flotation, it may also be towed to the victim. Instruct the victim to place the sling over their head and under their arms. Haul the line in to bring the victim alongside the vessel.

Immediately evaluate the victim for injuries. If the victim is not breathing, immediately start CPR and make a mayday radio call for assistance. If the rescue swimmer requires help getting aboard, use the rescue sling and lifting gear to bring them aboard.

Man overboard victims are frequently very cold and suffering from hypothermia. People with mild hypothermia will be alert, shivering, and may lack full coordination and stumble in their speech. Victims with mild hypothermia are capable of rewarming themselves and will benefit from dry, warm clothing, food, and a warm drink.

Those with moderate hypothermia may stop shivering and will exhibit a low level of consciousness. They will exhibit slurred speech and be unsteady on their feet. Victims of moderate hypothermia may not be able to warm themselves and will need prompt medical attention. Victims of severe hypothermia will be unresponsive, exhibit a decreased heart beat and rate of respiration. They are unable to rewarm themselves and require special treatment and immediate medical attention.

Fate favors those that are prepared. First and foremost, always wear your PFD when on deck and require your crew to do so, a well. A PFD will buy a person overboard time to be rescued. Next, rig up or purchase a dedicated recovery sling. MARSARS™ and LifeSling™ are two popular brands. Keep the sling accessible, in a location known to everyone aboard. Then practice with your recovery sling so that your crew can effect a recovery without having to figure it out on the fly.

Write man overboard recovery into the station bill in your vessel’s emergency procedures. Drill man overboard scenarios, both when moored and underway. If moored in a safe location, you can practice with a crew member in the water in an immersion suit. At sea you can practice with a float tossed over the side. Practice simple turns and Williamson Turns so that the helmsman can perform the maneuvers automatically.

If you have not already taken a Fishing Vessel Drill Conductor class, do so. If it’s been five or more years since you received training, consider a refresher class. In either case, you will be brought up to date on the latest information on marine safety and survival equipment and skills. When it comes to handling a man overboard scenario, there is no substitute for training and preparation.